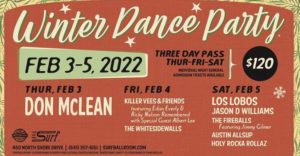 After taking a year off due to the pandemic, the Winter Dance Party has returned to the Surf Ballroom in Clear Lake.

Surf executive director Laurie Lietz says people are ready to celebrate the lives of fallen rockers Buddy Holly, Ritchie Valens, and “The Big Bopper” J.P. Richardson. They were killed in a plane crash north of Clear Lake hours after playing at the Surf on February 3rd, 1959.

Don McLean, who wrote the song “American Pie” to honor the legacy of the early rock legends, was originally scheduled to kick off the Winter Dance Party last year as part of the 50th anniversary of the release of the song. He agreed to come back after last year’s event was scrubbed. McLean’s show tonight is sold out. Individual tickets are still available on Friday and Saturday nights.

Lietz says Friday night’s event features some long-time staples of the event. She says it will feature the Killer Vees, which is Bobby Vee’s sons; Edan Everly & the Ricky Nelson Remembrance Tribute, which is Ricky Nelson’s twin sons Matthew and Gunnar Nelson; along with special guest Albert Lee and the White Sidewalls.

Saturday night’s lineup includes the rock band Los Lobos, who performed eight songs on the soundtrack of the Ritchie Valens biopic “La Bamba,” as well as other groups making a return to the event. “Jason D. Williams is there. The Fireballs – Jimmy Gilmer is one of the original Fireballs – it’s getting tougher and tougher with each passing year to get original 50s acts to come in.

Austin Allsup, who is Tommy Allsup’s son, and the Holy Rocka Rollaz, which is a fan favorite cover band out of Minneapolis. They get it. They love the music. They love the Surf, and it almost feels like it wouldn’t be a Winter Dance Party without them.” On Wednesday, the Surf hosted about 800 north-central Iowa elementary students as part of a field trip which Lietz says educates them about the meaning behind the event.

“We have three separate kids shows,” Lietz says. “The schools bus them to the Surf where we do a brief education-type session about rock-and-roll history, the Surf Ballroom history. After that, they get to have their own little mini-sock hop. That’s our kickoff to the week and that’s always one of the most fun and touching things that we do. It’s just so much fun to see all the little kids in their poodle skirts and just have them learning. They’re our legacy, so we’re pretty excited to have them all come in.”

You can purchase individual tickets for Friday and Saturday night’s events by heading to surfballroom.com.