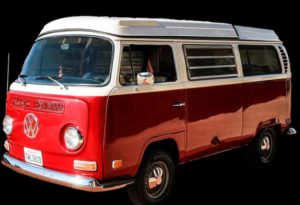 This year marks the 50th anniversary of an eastern Iowa camp that serves thousands of Iowans of all ages with special needs, Camp Courageous in Monticello.

To benefit the non-profit camp, executive director Charlie Becker says he’s parting with one of his prized possessions: a bright red 1971 Volkswagen van. “In honor of Camp Courageous’ 50th anniversary, we donated that to the camp,” Becker says. “It’s a 50-year van given to a 50-year camp to be raffled off.”

The van has a long history and was recently trucked back to Iowa from California for a new paint job and a complete overhaul, inside and out. Becker says the VW has 87,000 original miles.
“It’s in beautiful condition,” Becker says. “The person that had it before me used to drive it every day to work and it is in pretty close to mint condition.”

The raffle will be held in December and tickets are $100 each. Becker says when the camp first opened in 1972, it only was able to serve 211 Iowa campers. “Right before the pandemic, we were right up just short of 10,000 campers,” Becker says. “We were breaking all the records and then the pandemic hit so we were still serving campers, but in a whole different way.”

Last year, about 3,800 Iowa campers were served in various ways, and last month, a group of them visited Walt Disney World in Florida. The VW will be on display at the camp and at some events this summer. For details on the raffle, visit: www.campcourageous.org.