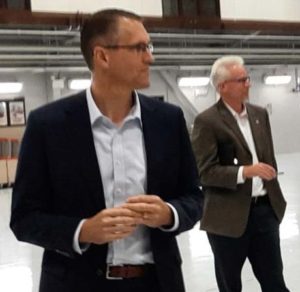 Iowa Congressman Randy Feenstra says Congress needs to work towards a balanced budget to get the nation’s economy back on track, but the 4th district Republican says that is proving difficult.

“You have to have what we have in Iowa — a 99 percent spending limit — and yet the Democrats, they want to add another three to five trillion dollars to our debt, even adding more cash to the system,” Feenstra says. “And that’s what boggles my mind. Who are their economists? Who thinks this is right? Even the Federal Reserve…are saying this is not the right way to do this.”

Feenstra says the talk of the federal reserve raising interest rates won’t fix the problem. He says we have traditionally kicked up interest rates when there is inflation — but he says that also kicks up the interest rate on our Trillions of dollars in debt. “So all of a sudden you create a debt spiral — and that’s why we are in such a serious situation right now in our country,” he says.

The Republican from Hull says there is no leadership being shown by President Biden or majority democrats to address the nation’s inflation. “Everybody is just asleep at the wheel right now when we’ve got these big issues. And we’ve got to have strong leadership — but that’s not what’s happening right now,” Feenstra says.

He says it’s frustrating being in the minority party in Congress where it’s tough to get any movement on possible solutions to the economic problems facing the country.