You are here: Home / Crime / Courts / Man gets gun into police vehicle in Sioux City 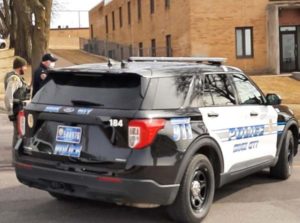 A man is facing charges after a standoff in the back of a police car near Sioux City Heelan High School this morning.

Sioux City police sergeant Jeremy McClure says the officers had stopped a suspect possibly involved in an armed robbery near the high school around 11:30 and put him in the patrol car.

“He was handcuffed in the back of the squad car and indicated that he had a firearm. Officers checked and it turned out that he did have a firearm in his hand. And so, we backed up and began negotiating with him as he was threatening to do harm to himself,” he says.

The sergeant says they tried for an hour to get the man to give up the gun. He says they reached out to the man’s family members to help with the negotiations, but the man became more agitated, and tactical team officers moved in.

“As they were moving up a shot was fired from inside the vehicle…the tactical officers used chemical munitions to make it an environment he did not want to be in anymore. At that point, he surrendered peacefully,” according to McClure.

The man was later identified as 36-year-old Emanual Pleitez , and was taken to a local hospital for treatment. Sioux City Police Chief, Rex Mueller spoke at a news conference after the standoff was over and says they found the gun in the police vehicle.

He says the gun was a subcompact or micro-compact handgun. “Now the thing that is concerning about these is they are very small, they are very lightweight and very easily concealable. So this makes searches for officers very concerning under any circumstances,” Mueller says.

The Chief says the DCI will review everything as the department conducts its own investigation on their performance. “But I can tell you this is an incredibly frightening incident — that it highlights the danger that our officers are in on a daily basis,” Mueller says.

Bishop Heelan High School was placed on lockdown during the incident. Fourth District Iowa Congressman Randy Feenstra was visiting the high school at the time of the incident and remained inside until the man was taken into custody.