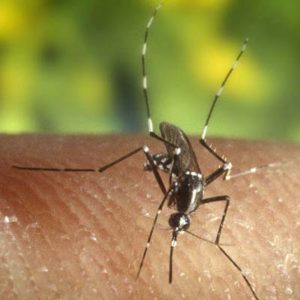 Mosquito surveillance efforts led by Iowa State University entomologists have found evidence for the first time of a new mosquito in three counties.

Entomologist Ryan Smith says it was believed the Aedes albopictus mosquito would not make it through Iowa’s cold temperatures.

“It’s been found in some of the neighboring states, Missouri and Illinois, but it’s been thought as you went a little further north it wouldn’t survive the winters. Our data suggest not only is it surviving — but it seems to be actually spreading,” Smith says. The mosquito was been found in traps in Lee and Des Moines counties in southeastern Iowa along the Mississippi River, and in Polk County in central Iowa.

He says the mosquito’s ability to carry those diseases changes things. “Every year people from Iowa go off to tropical places and bring back some of these mosquito-borne diseases,” he says. “And with having these mosquitoes here there is a very rare chance — but possible — they can become infected as they feed on one of these people and can cause further transmission.”

Smith says it is not something to cause great worry — but it is something to be aware of.
“I think it just kind of raises — especially if you are in some of these counties — the potential that these could be a nuisance and potentially bite you on summer days. And I think it also kind of stresses trying to remove any kind of debris or items on your yards or property that can collect standing water,” Smith says.

The most common mosquitoes in Iowa are impacted by dry times — but Smith says this new mosquito can manage dry conditions much better. “This one is going to rely on those little places that can collect some water. The eggs are able to withstand long periods of drought. Sometimes just a little bit of rain can trigger them to pop out in pretty large numbers,” he says.

Smith says this mosquito is very recognizable compared to the ones you usually see in the backyard.”It is very dark in color, almost black, and has kind of white bands on its legs and abdomen. And most distinctly it has a single white kind of racing stripe right down its back,” Smith explains. Smith says if you do see this type of mosquito he would like you to let him know.