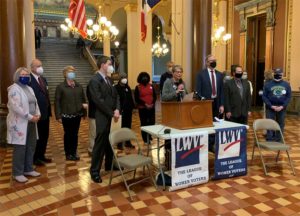 The League of Women Voters of Iowa led a coalition of groups that have collected 5000 signatures on petitions asking the Republican-led legislature to repeal recent election law changes.

The coalition is asking Republican lawmakers to restore a longer period of early voting and get rid of restrictions that limit who may help older Iowans cast an absentee ballot.

The group cites data from low turn-out elections held in 2021 that indicate hundreds of Iowans who tried to vote early couldn’t get an absentee ballot in time and they warn thousands more will face those obstacles in the 2022 and 2024 elections.

The head of the American Civil Liberties Union of Iowa said the coalition is on a moral mission to protect Iowans’ fundamental right to vote.

Republican Governor Kim Reynolds has said the election law changes made a year ago give Iowans “even greater confidence” as they cast their ballots. During debate last year, Republican Senator Jim Carlin said the changes were made because many in the GOP believe the 2020 election was stolen from President Trump.