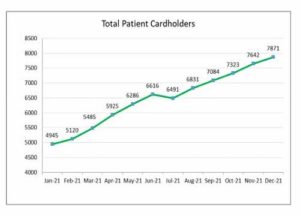 The number of providers and people using the state’s medical-marijuana program increased last year as the state came out of the pandemic.

He says they started seeing the impact of the law that added more people to the list of those who can prescribe medical cannabis for patients — with 50% of the new prescribers being Advanced Registered Nurses, 40% were doctors and less than one percent were podiatrists.

He says the number of people with got cards for medical marijuana increased to more than 8,000.
“During the pandemic due to numerous issues that we came up with solutions for, we had a little less than 5,000 at the end of 2020. So we’ve seen almost a 60% increase in the total patient population since 2020 ended,” according to Parker.

Parker says the age of those getting the products hasn’t changed dramatically. “There’s always a concern about whose participating in the program. But at this point less than two percent of the population is under the age of 18,” he says, “And then, it’s really kind of broken down 50-50 between those under the age of 50 and those over the age of 50.”

Parker says sales went up in 2021. We saw over 6.2 million dollars in sales — that’s a 76% increase over the three-point-five that we saw in the year before. We are seeing about 3,300 average transactions per month, which when you compare year-end end 2020, is 36% more traffic,” according to Parker. He says the average transaction price stayed right about $150.

Parker made his comments at the Board’s meeting last week.