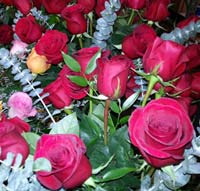 Iowa’s flower shops will be doing blooming — make that booming — business on this Valentine’s Day.

Kelsey Thompson runs a flower shop in Algona and is vice president of the Iowa Florists’ Association. Just like any industry, she says florists are being impacted by supply chain issues, so she’s been planning for this day since last fall.

“I pre-booked my flowers with the farms as early as October all the way through January,” Thompson says. “We are getting our orders in early so that we don’t run out for our customers.” It will be a long but profitable day ahead and she says not everyone is looking for a dozen, long-stemmed red roses.

“This year we’ve been selling a lot of mixed bouquets as well, as people like the different colors,” Thompson says. “Roses are amazing and they’re a Valentine’s classic but a lot of folks like just the mixed, bright colors as well.”

And for those who do want the traditional box of a dozen red roses, it’ll be more expensive than last year’s bouquet. “This year, they’re up about 25-to-30 percent, my cost,” Thompson says. “We’re trying to make sure we’re keeping it reasonable for folks but I would say, at my store, you’re going to get a nice dozen for about $100 to $120.”

A study from the National Retail Federation found Americans spent more than 21-billion dollars on Valentine’s Day last year. That’s down about 20% from the $27.4 billion they spent in 2020.