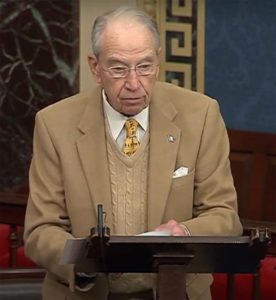 Senator Grassley speaks about the bill on the Senate floor.

On the fourth anniversary of the deadliest high school shooting in U.S. history, Iowa Senator Chuck Grassley pushed for passage of his bipartisan bill called the EAGLES Act.

Grassley, a Republican, says the bill would expand the role of the U.S. Secret Service’s National Threat Assessment Center to identify and manage threats from teenagers before they result in more tragedies.
Grassley says, “We would, by amending that assessment center, give it responsibility not only to do what the Secret Service already does there but to prevent school violence.”

Seventeen people were killed at a high school in Parkland, Florida, with 17 more injured. A 19-year-old former student was charged in the Valentine’s Day 2018 killings, which surpassed the Columbine High School massacre that killed 15, including the perpetrators, in Colorado in 1999.

Under his bill, Grassley says trained professionals would be tasked with working to identify and manage threats at the high school level before they occur. “My bill would direct experts in child psychology to work closely with the Secret Service Threat Assessment Center to develop proven and evidence-based techniques to identify potential threats,” he says.

Passing the legislation is vital, Grassley says, in the fight to protect schools and to promote safe and healthy learning environments. The measure would establish a Safe School Initiative to expand research on school violence and how to prevent it. Grassley says, “The EAGLES Act will equip schools with needed resources to identify troubled youth and give them the intervention and treatment that they need, hopefully long before an intervention is needed by law enforcement.”

The Parkland, Florida shootings took place at Marjory Stoneman Douglas High School where the school mascot is the eagle. Grassley named his bill after that mascot and says the measure has wide bipartisan support in the Senate while an identical bill was introduced in the House.

Grassley says the bill is backed by more than 40 state attorneys general, including Tom Miller from Iowa.