You are here: Home / News / State continues effort to keep spongy moth across the border 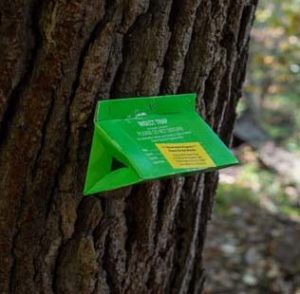 An invasive moth that can eat away the leaves of trees has so far been held in check in Iowa.

The DNR’s Tivon Feeley monitors the gypsy moth — which is now known as the spongy month. “We’ve caught a few captures statewide this past year, but they are pretty low in number, and mainly in northeast Iowa. If we look back over the years, we’ve had to do some controls to kind of keep those populations at bay — and those have been very successful,” according to Feeley.

He is the DNR’s forest health program leader and says there’s a concern about the population of spongy moths in Wisconsin and Illinois. “What we’re looking at here is how to keep those from spreading over and how to slow that spread down. And that’s what we work on. So we do trap and monitor where they are at,” he says.”We use a technique called mating disruption to prevent them from spreading as quickly. And that’s when you go out to the forest and spray the scent of the female — the pheromone out into the forest — and then they can’t find each other to mate.”

He says they can quickly impact trees. “The caterpillars defoliate trees — they prefer oaks — but there are over 300 species of trees that they will feed off of. The months lay their eggs –hence the name spongy, they look a little spongy — on just about everything from underneath your tire on your RV, to your boats, you name it,” Feeley says.

He says you can help prevent their spread by looking for their eggs if you are in other states. Feeley says they have traps set up to keep an eye on the spongy moth movement. He says they have some 1.800 delta traps that look like green and orange triangles in nine northeast Iowa counties

“It has the scent of the females inside, and when the moth flies by, the male moth gets stuck in there. And that helps us monitor their populations,” Feeley says. He says Iowa doesn’t have any spongy moth treatments set for this year, but there is one across the river in Wisconsin.