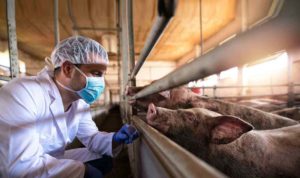 A highly-contagious pig disease has been found in the Caribbean, and if African Swine Fever were to spread to the Midwest, it would have a devastating impact on pork producers.

The viral disease is confirmed in the Dominican Republic and Haiti. Jack Shere, with the U.S.D.A.’s Animal and Plant Health Inspection Service, says they’re keeping a close eye out.

“We have to be sensible about what we restrict,” Shere says. “Anything that we recover that’s pork-related from Haiti or from the Dominican Republic at the airports or from seaports, we confiscate that and we incinerate it.”

The U.S. has strengthened border protections, while pork from those Caribbean countries can’t be imported here. Plus, the U.S. monitors pork processing plants in Puerto Rico for the disease. Shere says those measures are working.

“I think our mitigation strategies have been very successful up to this point,” Shere says. “As always, you never want to let your guard down with any disease.” Shere says American producers should have good biosecurity measures in place, which includes restricting visitors and disinfecting boots.

Ag economists say if African Swine Fever should make its way to the Midwest, pork export markets would shut down. Shere says the best way to keep it out of the U.S. is for widespread testing in the Caribbean and culling pigs that are positive.