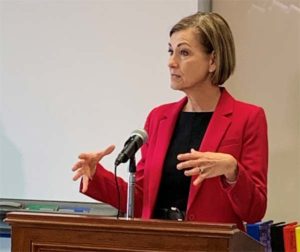 Governor Kim Reynolds is likely to sign legislation that would limit participation in girls’ sports to students who have female marked on their birth certificates, but she’s withholding a definite answer until the bill reaches her desk.

“I said it’s a fairness issue last year and if it landed on my desk, depending on what it said, I would probably sign it, so I believe it is a fairness issue,” Reynolds said during a news conference yesterday. “I believe if we don’t do something it does start to eliminate girls’ sports. That was set up for a reason way back when. I don’t know if we’re trying to erase history, once again, but it is a fairness issue.”

Nine other states have enacted laws that prevent transgender athletes who identify as female from competing in girls’ sports and similar legislation cleared a committee in the Iowa House Monday night. Critics of the bill say it discriminates against transgender girls and amounts to state-sanctioned bullying of kids who are at greater risk of depression and suicide.

In April of last year, Reynolds said letting biological males who identify as females compete in volleyball, softball and other girls’ sports in Iowa is unfair and she repeated that message yesterday.

The bill allows girls to sue if they are harmed directly or indirectly by a school that allows transgender athletes to participate in girls’ sports. The leader of a national suicide prevention group for transgender youth says the legislation uses LGBTQ kids as political pawns and will lead to further isolation for a small group of students.