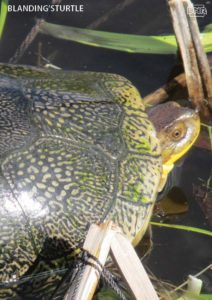 The Iowa Department of Natural Resources is joining Iowa State University on a project to document and help endangered turtle species increase their numbers.

The DNR’s Karen Kinkead says the Blanding’s turtles don’t mature and reproduce at a very fast rate. “The average is about 14 years — but it varies individually by turtle before they lay their first eggs. And the nests are very susceptible to predators — particularly raccoons and skunks,” Kinkead says. She says there’s been less trapping of raccoons and skunks in the state and that has led to increased predators for the turtle.

The Blanding’s turtles are found in wetland areas of northwest and central Iowa. “They are a state-listed species, so we don’t give out specific locations,” according to Kinkead. “They’ve got a bit of a black market following, so we try to keep that private so that the turtles aren’t collected illegally.”

The plan is to monitor the turtles with radio transmitters. “The University of Northern Iowa has been doing some work on a different species of turtles for a very long time — and so they’ve sort of figured out the methodology of which transmitters to use and how to set them and how to attach them to turtles. And it should work the same way on the Blandings turtles that we are interested in,” she says.

They also plan to work with the Blank Park Zoo in Des Moines to gather some eggs and hatch out turtles to be placed back in the wild. “We think that doing it that way a turtle in captivity will be about the size of a three-year-old turtle in the wild after about a year,” Kinkead says. “And just that just gives them a bit more protection and gives their shell will harden and they get to a larger size — so it’s harder for like a great blue heron to swallow them whole for example.”

The Blanding’s turtles can live to be 75 years old. She says it’s important the DNR’s Wildlife Diversity Program does what it can to help this species. “They’ve certainly been around a very, very long time and I don’t think it is responsible of us to let them go extinct on our watch if we can help it,” Kinkead says.

The DNR is providing $163,000 for the project, with ISU chipping in $57,000. They have a two-and-a-half-year agreement to track and detail the lives of the turtles.