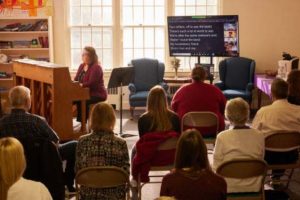 An Iowa State University researcher is studying how singing can help those who have Parkinson’s disease.

Elizabeth Stegemoller says Parkinson’s disease affects an area of the brain that controls movement and she’s trying to find out how music impacts its symptoms. “We haven’t looked at whether or not it is going to hold off the progression of symptoms — but we do see that their singing can help improve some of the symptoms,” she says.

Stegemoller is an associate professor of kinesiology, and a music therapist with a doctorate in neuroscience, She says the first music study found patients were helped with their breathing and the muscles used for swallowing.

“This is important because aspiration pneumonia is one of the leading causes of death in people with Parkinson’s disease — because of swallowing issues,” Stegemoller explains. “And so the breathing part is even important because you want that forceful cough to get rid of any particular foreign material if it does get into the lungs.”

Stegemoller says one study found other benefits as well. “They reported that they felt less stress, that they felt a better camaraderie and bonding between participants. And one lady even mentioned — well several mentioned that they moved better,” she says.

One of the symptoms of Parkinson’s that is most noticeable are the tremors that cause movement and says another study found similar movement results. “Their walking and tremors and posture improved after singing,” Stegemoller says.

Stegemoller says the symptoms can vary greatly among patients, so she is not trying to come up with one singing plan for everyone.”My goal is to really understand the why behind it. You know, why is this working? Because I think music in itself is so individualized that it would be challenging to standardize just one treatment that works for everyone that involves music,” Stegemoller says.

Stegemoller received a three-year grant from the National Endowment for the Arts to determine the underlying mechanisms by which singing helps improve symptoms of those with Parkinson’s disease.

Stegemoller says ISU Extension has some resources on its website to help Parkinson’s patients.