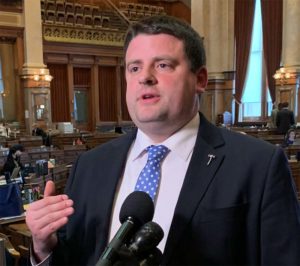 House Speaker Pat Grassley has used his authority to shift the governor’s plan for state-funded private school scholarships to another House committee, so the bill remains eligible for debate.

The bill as currently written did not have enough support among Republicans on the House Education Committee, dooming its chances of clearing the panel by today’s deadline for a committee vote. Grassley has reassigned the bill to the House Appropriations Committee, where all bills are eligible for a vote at any time.

“We’d like to have further discussions,” Grassley said, “and see what something may look like where we can get the support.”

Governor Reynolds originally proposed state-funded scholarships for students to transfer out of a handful of underperforming school districts and into a private school, but the proposal stalled in the House a year ago. Her revised plan calls for creation of 10,000 state-funded accounts — each worth $5300 — to cover the costs of a private school transfer, along with a new state fund that would be distributed to public schools in rural areas.

Democrats say public tax dollars should be spent on public schools and they have opposed the governor’s proposals.