You are here: Home / Weather / Winter Weather Advisory posted for some counties 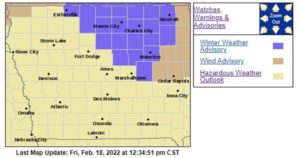 Some 20 counties in north-central and northeast Iowa will be under a Winter Weather Advisory later today with the potential for snow squalls.

Meteorologist Brad Small, at the National Weather Service in Johnston, says it’ll be quite windy statewide this afternoon with unseasonable highs in the upper 30s, 40s and even low 50s, but a cold front will arrive late this afternoon and into tonight.

“That will bring even stronger northwest winds with gusts of 35, maybe even 50 miles per hour across the north half of Iowa as that front moves through,” Small says. “The front may also bring a period of snow showers, some of those may be intense, with some brief snow squalls as well.”

The weather rollercoaster will likely continue over the next several days. “The weekend looks dry and we have some temperature flip-flops,” Small says. “Cool on Saturday but quite warm Sunday with highs in the 40s and 50s, but then we cool down again. Winter’s not over. We have chances for wintery precipitation, possibly some snow accumulations and multiple precipitation types for a system Monday and Tuesday.”

The forecast high temps for Tuesday are only in the teens. Keep up with the forecast at weather.gov.