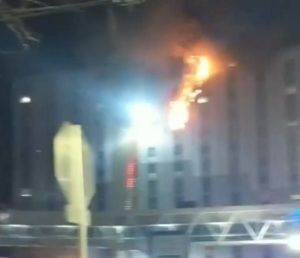 Investigators in Cedar Rapids are trying to determine what sparked a fire at a high-rise apartment building there early Sunday morning.

Fire Chief Greg Smith told KCRG TV a fire like this is unusual. “It’s probably the most impactful high rise fire — actually true high rise residential fire — since I’ve been on the department for 28 years or so,” Smith says. Crews went door to door from the 7th floor and above to clear out the facility. Cedar Rapids Fire didn’t have an exact number of those evacuated from the Geneva Tower during a news conference on Sunday.

Geneva Tower is an income-based housing property. It mainly houses seniors and adults with disabilities. The department said two people suffered serious injuries. At least another seven people were transported to the hospital for observation.

Resident Ethel Brown talked with KCRG TV about the evacuation. “It was scary after I got back down here. I am on the sixth floor, I am on a walker, thank God the fire department helped me down,” she says.

Resident Melissa Long says they had to get out quickly. “All of a sudden here’s the cops banging on doors — you didn’t have time to do nothing — you’ve got to get it and go,” Long says.

Firefighters say the management of the high-rise building is working with contractors to look at the damages and clean the building. Cleaning and repairs will need to meet specific standards before people can move back into their apartments.

The fire department says Geneva Tower is a concrete structure, which means it holds the fire in the original apartment. The Fire Department is working with the Salvation Army and Red Cross to help those displaced.