You are here: Home / News / More snow expected along with the sleet, freezing rain 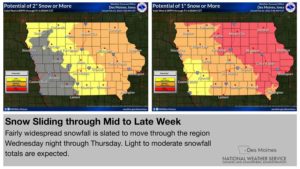 Freezing rain, snow and sleet are making for a challenging day for Iowa drivers — and walkers.

Forecasters say it’ll only get colder, with highs tomorrow in single digits and teens, and more snow likely on Thursday. Meteorologist Alex Krull, at the National Weather Service, says this morning’s wintery mix should end by midday for west-central and southwestern Iowa.

“Areas in east-central Iowa and northeastern Iowa will a little bit longer before conditions start to improve,” Krull says. “That won’t likely be until later in the afternoon as we have some more freezing drizzle that’s going to start moving off towards the east. In terms of far northern Iowa, we’re expecting snowfall accumulations of anywhere between two to three inches.”

While parts of Iowa saw unseasonably warm temperatures Monday with highs near 60 degrees, Krull says the state will only be seeing highs in the single digits and teens tomorrow.

“For the next couple of days, temperatures will be very cold, especially in northwestern Iowa,” Krull says. “We do anticipate the need to have wind chill headlines at least a wind chill advisory for northern and northwestern portions of Iowa, likely for Wednesday morning and perhaps again on Thursday morning, and there is the potential for more snow to occur across most of Iowa on Thursday.”

Highs back in the 40s and 50s are in the long-range forecast, starting around next Tuesday.