You are here: Home / News / Reynolds to deliver GOP response to Biden’s State of the Union address 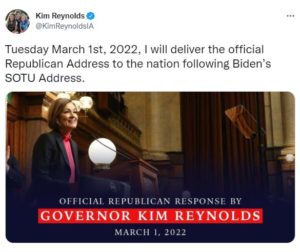 Iowa’s governor will deliver the Republican response to President Biden’s State of the Union address next Tuesday.

GOP congressional leaders released a written statement from Governor Kim Reynolds. Reynolds said the Biden Administration is pursuing a “far left” agenda and she’ll focus on the alternatives she and other Republican governors are pursuing in their respective states.

Delivering the televised response to the president’s address is a prized spot on the national political stage. During the Obama Administration, Florida Senator Marco Rubio and former Louisiana Governor Bobby Jindal were selected to give GOP responses before they launched their presidential bids in 2016.

Kentucky Senator Mitch McConnell, the Republican leader in the U.S. Senate, said Republican governors are “fighting and winning for families” and the leadership Governor Reynolds has shown puts her “right at the front of that pack.”

Joni Ernst delivered the GOP response to President Obama’s 2015 State of the Union address, shortly after Iowans elected her to the U.S. Senate in 2014.