You are here: Home / Fires/Accidents/Disasters / State Trooper involved in accident on I-29 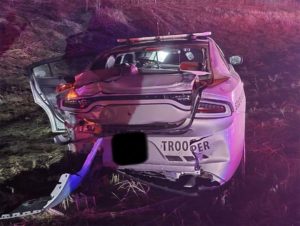 An Iowa State Patrol trooper was among four people were hurt in a collision early today in Pottawattamie County.

Trooper Adrian Long, from Denison, was assisting at the scene of a previous accident at around 1 a.m., when his Patrol Cruiser with its emergency lights on was struck while sitting on the shoulder of Interstate 29 southbound near Loveland.

The accident happened when a southbound car driven by 29-year-old Elizabeth Braun, of Omaha, went out of control on the ice-covered road as she approached the Trooper’s Dodge Charger. Her car struck a cable barrier. An SUV driven by 27-year-old Cha’Ron Thompson, of Omaha, was approaching the Honda, which was partially on the road, when the vehicle went out of control and struck the rear of the Honda. It then spun across both lanes of traffic and hit the Cruiser, which came to rest in the west ditch. 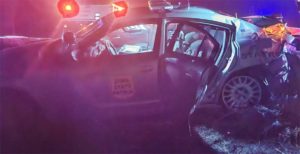 Trooper Long, Thompson, and Braun were injured in the crash, along with a passenger in SUV, 21-year-old Dallas Thompson.

Cha’Ron and Dallas Thompson, along with Elizabeth Braun, were transported by ambulance to the University of Nebraska Medical Center, in Omaha. The three motorists were wearing their seat belts. Trooper Long was transported by law enforcement personnel to Mercy Hospital in Council Bluffs, and the patrol says he had minor injuries.