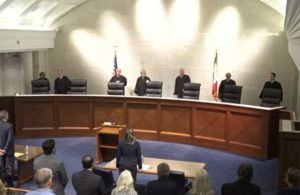 The Iowa Supreme Court is being asked to overturn its 2018 ruling that said the Iowa Constitution guarantees women a right to an abortion.

During oral arguments today, lawyer Chris Schandovel represented the state lawmakers who signed onto the case. He says the Supreme Court overstepped its authority in declaring the right.

“When the Constitution is silent and therefore neutral on an issue on abortion, the courts have a responsibility to be scrupulously neutral on those subjects, leaving them to the people to regulate through their elected representatives,” Schandovel says.

Schandovel says the 2018 ruling ignored precedent on abortion issues. “In order to be a fundamental right, that right has to be a liberty interest that is deeply rooted in the history of the nation or the state of Iowa. And we know that since 1843 before the Constitution of Iowa was adopted, Iowa criminalized abortion,” he says.

Justice Brent Appel asked if the Constitution that was written by men and the laws that were created by men left out the voice of women — and if they should still apply in 2022. “The words in our state Consitution have to be defined by their original public meaning. So it’s not a question of what was in the mind of the male legislators — it’s a question of what the public — including men and women — would have understood that word liberty to mean,” according to Schandoval. “Since abortion was criminalized at the time of its framing — no member of the public male or female — would have thought that they had a constitutional right to commit an abortion.”

Rita Bettis-Austen represents Planned Parenthood and says the procedure used to pass the 24-hour law is the issue. “And it’s not a case that squarely or properly presents the question of whether abortion is protected under the Iowa Consitution or whether strict scrutiny or undue burden is the appropriate test. That’s for numerous reasons and they are all about process. Process is what this case is really about,” Bettis-Austen says.

She says the state didn’t show the process was properly followed to show the new law brought something new to the table. “Planned Parenthood put forth really undisputed record evidence. It was incumbent on the state to dispute that with any factual evidence. The district court found that it had made these vague and hypothetical arguments about how things could be different — but that is not enough on summary judgment,” she says.

Bettis-Austen says the state wants to improperly use this case to overturn the 2018 ruling. “That state’s argument is very simple — it just that it disagrees with this court’s prior precedent, and that is not enough,” she says.

The Supreme Court will issue a ruling in the case later. The high court has changed dramatically since the 2018 ruling, as the chief justice at the time died and Governor Kim Reynolds has appointed four of the seven justices now on the court, including the new chief justice.