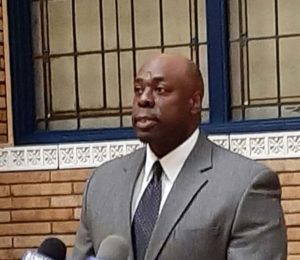 The Woodbury County Attorney has cleared the deputy involved in the January 12th shooting that claimed the life of a man in Sergeant Bluff.

Fay along with deputy Devin Groenhagen and Sergeant. Bluff officer Jereme Muller had responded to a disturbance at a trailer where a man and woman were shouting. Groenhagen had backed away and fired his taser while Fay fired his gun. Jennings says an autopsy showed Meredith died from a single shot to the chest. The taser strike did not contribute to his death.

Jennings ruled based on evidence from an investigation by the Iowa DCI and body camera footage from the three officers that Fay was justified in using deadly force to defend himself. Woodbury County Sheriff Todd Sheehan says an internal investigation of the shooting found no department policies were violated.

“Deputies Eric Fay and Devin Groenhagen were forced into a life and death situation and had approximately four seconds or less once confronted with the attack. No law enforcement officer wants to be forced to take the actions that were taken that evening — but I thank God there are men and women willing to place themselves in harm’s way, willing to keep our citizens safe,” Sheehan says.

Sheehan says Fay has 12 years of law enforcement experience. “Deputy Fay is still on paid administrative leave as he continues to process and deal with the emotional effects this incident has had both on him and his family,” according to toe Sheehan. “We will continue to support him, and we will welcome him back to full duty as soon as he is ready.”

Sheehan released body camera video of the incident from the three officers who responded.