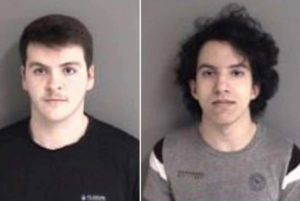 Eighteen-year-old Abdullateef Malallah, and 19-year-old Ty Jerman, both of Ames, were later arrested and have since been charged making terroristic threats in the case. University officials say there is no known connection between the two students and the posts were made separately.

While there is no indication that either student planned to enact violence against the campus community, university officials say actions of such nature are treated as a serious crime. On Monday evening, ISU police received a report about an anonymous Yik Yak post, which referenced Carver Hall, an academic building on campus. The post contained a warning advising people not to come to Carver at 4:30 p.m. on Tuesday.

A second anonymous post was reported a few hours later with a warning to avoid Parks Library. ISU police, with assistance from the FBI and the Iowa Division of Criminal Investigation, worked overnight Monday to identify and monitor the individuals responsible for the posts.

Based on information gathered during the initial hours of the investigation, police determined it was not necessary to close the university and worked with building administrators to implement safety measures as a precaution, the university said in a press release.