A plan to shrink Iowa’s personal income tax to one rate of 3.9% by 2026 has cleared the legislature with the support of 89 Republicans and four Democrats.

The bill also eliminates the state tax on retirement income and creates a new tax break for retired farmers. Senator Dan Dawson, a Republican from Council Bluffs, said state tax revenues have soared above expectations and it’s time to seize the opportunity.

“Our state is charting a new way forward wherein, for the first time, we are treating all Iowans’ work fairly and equally by enacting a flat tax,” Dawson said near the end of Senate debate of the bill this afternoon.

Representative Lee Hein, a Republican from Monticello, guided the bill through House debate. “We can deliver, tonight, the largest tax cut in Iowa history,” Hein said, “while continuing to deliver Iowans’ priorities.”

Democrats say the state has excess cash on hand because of the influx of federal pandemic relief money. Others, like Senator Pam Jochum of Dubuque, say a flat tax primarily benefit the wealthy — and “trickle down economics” doesn’t work.

“Whether you like it or not, this tax plan — the governor’s tax plan — is going to shift the tax burden to those who can least afford it,” Jochum said.

Representative Lindsey James, a Democrat from Dubuque, said Iowans living paycheck-to-paycheck will get little, if any benefit.

“It will take the average Iowan a century to receive the same tax benefits that the ultra rich will receive in a single year,” James said.

Democrats accused Republicans of rushing the bill through because Governor Kim Reynolds will be giving the Republican response to President Biden’s State of the Union Address Tuesday night. “Everybody knows why we’re debating this bill today, because our governor is going on the national stage next week, bragging about the tax bill,” said Senator Tony Bisignano, a Democrat from Des Moines who voted for the bill because it eliminates the tax on pensions and other retirement income.

House Speaker Pat Grassley said the bill sped through the legislature because it’s a priority.

“We’re Republicans,” Grassley said during a news conference early this afternoon. “We want to sustainably provide tax relief to Iowans.” 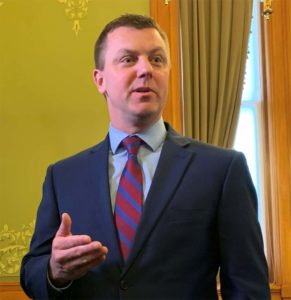 Senate Majority Leader Jack Whitver, a Republican from Ankeny, said the plan has been in development for six months and makes Iowa’s personal income tax rate fourth lowest in the nation.

Governor Reynolds issued a written statement tonight, using words like “bold” and “transformative” to describe the bill, which she intends to sign in the next few days.

The bill sets up a mechanism that could shrink the state’s corporate income tax to a single rate of 5.5%, but the bill also reduces some business tax credits that are refundable. Whitver said that’s a remarkable step forward.

“There are lobbyists that are paid here to protect all those carve-outs,” Whitver said, “so it’s just a determination from the House, the Senate and governor to do what’s right and reform the system.”

Representative Dave Jacoby, a Democrat from Coralville, said reducing the state’s research activities credit may be the wrong move. “Research and development are so important in the state of Iowa,” Jacoby told reporters. “…I think we’re taking from one silo and putting into another and rolling the dice.”

The centerpiece of the bill, however, is the reduction in personal income taxes. Republicans say every single Iowan will have more money in their pockets as a result. Democrats say a Department of Revenue spreadsheet indicates 30% of tax filers will not see any reduction in their income taxes.