You are here: Home / News / Radio reading program for blind hangs on during pandemic 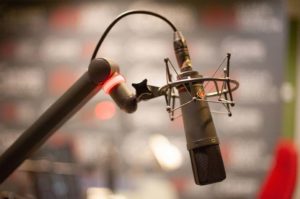 The volunteer radio service that reads local newspapers to blind people in the Davenport area had to slash its efforts due to the pandemic. Just one person remains who reads the papers aloud for a few hours each weekday, half the time volunteers would ordinarily provide.

Jay Pearce, CEO of WVIK in Rock Island, occasionally gets calls from listeners of the service.  “They miss the connection to the community. They miss the people,” Pearce says. “They appreciate the information that they’re getting but it’s not that local connection that they’re used to having.” The service called APRIS , the Augustana Public Radio Information Service, is broadcast by WVIK on a special radio signal and online.

Pearce says the service had to be cut to the one reader two years ago due to COVID-19, and it’s unclear when the others will be able to return. “It’s getting that connection with a person and they understand,” Pearce says. “The volunteers ask, on a regular basis, ‘When can we come back? When can we come back?’ because they miss being here. They feel like they’re fulfilling a real service — and they are.”

The one reader who remains is APRIS coordinator Pete Peterson, who knows the obituaries are important to include for the listeners. When APRIS is not broadcasting local newspapers, it airs the Talking Information Center, based in Massachusetts. Executive director Anna Dunbar says the nonprofit offers continuous, free programs that feature volunteers reading from national newspapers, books and magazines.

Hundreds of people in the Quad Cities — and thousands around the country — rely on these reading services. “It certainly became essential and vital during the pandemic for their mental wellbeing,” Dunbar says. “Our listeners tell us all the time that it’s the human voice they really appreciate. That’s the lifeline, because it sounds like your friend in the room reading the paper for you.”

Dunbar says one of the most popular features is when they read the grocery store ads, the fliers that tell what’s on sale, what’s two-for-one. To blind people and those who are on fixed incomes, that information is particularly important, especially during the pandemic.