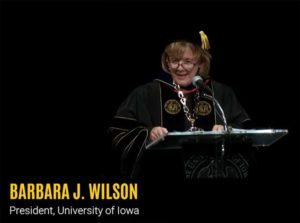 Wilson was named president by the Board of Regents in April of 2021 and she began the job in July of 2021 to replace Bruce Harreld who retired. She had served as executive vice president and vice president for academic affairs for the University of Illinois System since 2016. During her installation address, she reviewed the very beginnings of the school.

“Only 59 days after the state of Iowa itself was created — the Iowa Legislature founded the University of Iowa — with the mission to educate teachers for the state’s schools, as well as professionals for the state’s economic and cultural development,” Wilson says. She says the university has grown dramatically and in many ways since the very beginning and she wants to continue that growth.

“The future of the University of Iowa is bright. And my goal is to make sure the future shines as brightly as possible, ” according to Wilson. “I want to show what a public university can do and be in a state like Iowa.”

Wilson says she wants to continue building on the school’s reputation outside the state’s borders. “I also pledge to elevate Iowa’s excellence at the national level. We must be a magnet for talent for the best faculty and the best staff and the best students,” she says. “We must be known as a place where comprehensive excellence and creativity are encouraged, rewarded, and celebrated. And where people can achieve their best, regardless of background.”

Wilson is the third woman president to lead the University of Iowa.