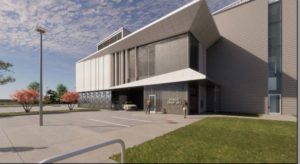 A drawing of the Hygienic Lab addition. (U-I drawing)

The Board of Regents has approved millions of dollars for the replacement of windows in the bridge between the Stead Family Children’s Hospital and the John Pappajohn Pavilion on the University of Iowa campus.

U-I senior vice president for finance and operations, Rod Lehnertz, says the windows have cracked, delaminated and developed blemishes. “The windows in that portion of the building need to be replaced at this cost $3.6 million. The cost for this project will be funded through the University Hospitals building usage funds as the university seeks reimbursement from the responsible parties,” Lehnertz says.

He says they are still trying to determine who is to blame for the faulty windows that were installed in 2017. “It’s not a simple matter. They are complex window systems and the components, the installation, the manufacture, and the design are all parties to the interests of that investigation,” he says. The work would start in September.

Lehnertz says that the construction manager will see them through the process and determine how to handle the windows, and that will ultimately determine how much is spent on the project. The windows of the Children’s Hospital are where patients view the waves of football fans at Kinnick Stadium after the first quarter of games — a tradition that has gotten nationwide attention.

The Regents also gave the go-ahead for the building of a two-level 7,300 square foot addition to the southeast corner of the State Hygienic Laboratory. “The budget that we are asking for approval for is ten million. all of those funds supported by and provided by the Centers for Disease Control and Prevention, CDC,” he says.

Lehnerts says the new building is needed to handle the larger volume of testing brought on by the pandemic. “It also includes a new drop-off area for the public for dropping off samples. This would be a project that would start construction by May of 2022, this spring, and would complete construction by requirements of the grant by June of 2023,” Lehnertz says.

The Board of Regents gave approval for the projects at its meeting last week.