You are here: Home / Sports / Iowa State’s Brockington is Big 12 Player of the Week 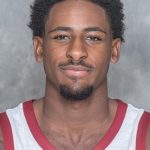 Izaiah Brockington collected his sixth conference weekly honor of the season as he earned his second-consecutive Big 12 Men’s Basketball Player of the Week accolade. Brockington is the first Cyclone with six honors in a season since DeAndre Kane in 2013-14.

Against West Virginia, the senior guard recorded a career-high 35 points, making 14-of-22 shots and a career-best five 3-pointers on eight attempts. He scored 25 second-half points as ISU rallied from a 12-point deficit. Brockington followed that performance with 17 points, eight rebounds and two assists against K-State, helping lift ISU to a fourth-straight win.