You are here: Home / News / Reynolds critical of Biden’s approach to domestic and foreign policies 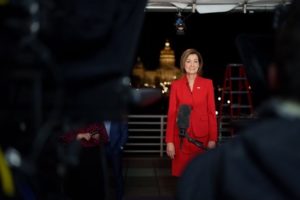 Governor Kim Reynolds delivered the Republican response to President Biden’s State of the Union address tonight, saying Biden had failed the country on both the domestic and foreign fronts.

“Instead of moving America forward, it feels like President Biden and his party have sent us back in time-to the late 70s and early 80s,” Reynolds said.

Reynolds called the withdrawal from Afghanistan “disastrous” and suggested the Biden Administration had shown “weakness,” leading to Russia’s invasion of Ukraine.

“We shouldn’t ignore what happened in the run-up to Putin’s invasion,” Reynolds said. “Waiving sanctions on Russian pipelines while limiting oil production here at home; focusing on political correctness rather than military readiness; reacting to world events instead of driving them.”

According to Reynolds, America is weak at home as well and she spent the bulk of her 14 minute speech focused on domestic issues. The governor accused Biden and Democrats in congress of not only ignoring, but fueling soaring inflation, Reynolds spoke of penny-pinching as a young mother when she worked at a Mount Pleasant grocery store.

“You don’t have to check groceries to see what high inflation does to people,” Reynolds said. “You just need to step outside the D.C. Bubble.”

Reynolds suggested Americans have a dim view of Democratic leaders in states, congress and the White House and, in her words, Americans are waiting “for the insanity to stop.”

Reynolds delivered her speech in downtown Des Moines, with the illuminated Iowa Capitol over her left shoulder. She touted her decision to require that Iowa schools have classes in-person at the start of the 2020-2021 school year.

“Iowa was the first state in the nation to require that schools open their doors,” Reynolds said. “…Keeping schools open is only the start of the pro-parent, pro-family revolution that Republicans are leading in Iowa and states across this country.”

President Biden said in his speech that “schools are open and let’s keep it that way.” Reynolds, near the end of her speech, mentioned the tax cuts she had signed into law earlier in the day. “Republican leaders around the country are balancing budgets and cutting taxes,” she said, “because we know that money spent on Main Street better than money spent on bureaucracy.”

The governor’s references tax policies — including criticism of tax cuts “for millionaires” in California, New York and New Jersey — drew an “ARE YOU KIDDING ME” from Senate Democratic Leader Zach Wahls of Coralville on Twitter. Wahls has been saying that’s what the governor’s tax plan does.

“That gives the benefit to the wealthiest people in our state,” Wahls said earlier today, “and will make it more difficult for middle class families to get by.”

Wahls said the Republican governor should have thanked President Biden for the federal pandemic relief being used for a variety of projects, like expanding broadband service.

“Governor Reynolds certainly knows all about the American Rescue Plan and she certainly tries to take credit for a lot of the work that the Biden Administration has done when it comes to doling those federal dollars out to various agencies and organizations across our state,” Wahls said.

House Democratic Leader Jennifer Konfrst of Windsor Heights said during a moment of “global crisis,” Reynolds should have talked about unity rather than criticize Biden’s foreign policy.

“We all know that she was chosen to give this speech because she does what folks in D.C., politicians in D.C. want her to do,” Konfrst said. “She follows the Republican playbook…whether or not it’s in the best interests of Iowans.”

Deidre DeJear, the leading Democratic candidate for governor, said the speech Reynolds gave shows she’s pursuing “extreme policies” that are “chipping away” at our democracy.

“Our current governor is focused on a national political agenda that we all know by now does no good Iowa,” DeJear said, “and no good for the rest of this country.”

DeJear said the tax plan Reynolds signed puts the interest of the governor’s donors ahead of ordinary Iowans.