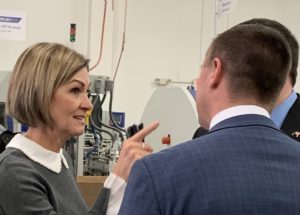 Gov. Reynolds speaks with Sen. Whitver and Rep. Grassley after the bill is signed.

Governor Kim Reynolds has signed the bill that flattens Iowa’s personal income tax rate to 3.9% by 2026.

“Today is a great day for the State of Iowa as we dramatically reform our tax system for the better,” she said, “and make our state one of the most competitive in the nation.”

Reynolds signed the bill early this afternoon. The new law exempts all retirement income from state taxes. It also provides new tax breaks for retired farmers and for people who retire from employee-owned companies.

“There’s never been a better time in Iowa for bold, sustainable tax reform and that’s exactly what today’s bill represents,” she said.

If certain revenue targets are met, the plan could lower the corporate income tax rate by more than 40%. Reynolds has been governor since May of 2017. This is the third time she’s signed a bill designed to cut taxes, including last year’s bill that eliminated the state inheritance tax and sped up a series of tax cuts Reynolds approved in 2018.

“We’ve accomplished what we have on tax reform in recent years by approaching the issue with purpose and patience, taking ever opportunity to make transformative change, while also understanding a strong tax code takes sustained, persistent work over years,” Reynolds said, “and that approach isn’t changing anytime soon.”

House Speaker Pat Grassley, a Republican from New Hartford, spoke after Reynolds and picked up on that theme. “We look forward to, after we’re all reelected, to doing this again moving forward,” Grassley said.

Senate Majority Leader Jack Whitver, a Republican from Ankeny, said Republicans promised they’d pursue this path if voters gave the GOP majority control of the Senate, alongside the Republican governor and Republican-led House.

“Six years ago we laid out a vision for Iowa and — more specifically — a vision for tax reform in Iowa, a vision where Iowa is a state that encourages work and encourages investment, a vision where retirees stay in Iowa to be close to their kids and grandkids, a vision of a tax code that is simple, flat and fair to taxpayers,” Whitver said. “House File 2317 brings that vision to life.”

Dozens of Republican legislators joined Reynolds for the bill signing ceremony. Reynolds thanked Whitver and Grassley “for your partnership” as she handed them pens she’d used to sign her name on the official copy of the legislation. Tonight, Governor Reynolds will deliver the GOP response to President Biden’s State of the Union address. 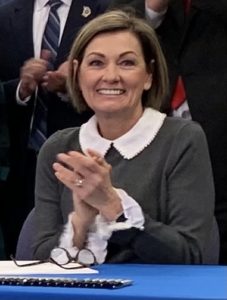 Democrats in the legislature say the tax plan gets rid of Iowa’s progressive tax system and provides a tax break to the wealthiest Iowans that will be 100 times greater than what middle income Iowans will get.

“This is a tax bill that’s going to overwhelmingly benefit the ultrarich and big corporations,” Senate Democratic Leader Zach Wahls of Coralville said during a news conference this afternoon. “…It’s wrong and it’s our view that it shouldn’t have happened.”

House Minority Leader Jennifer Konfrst, a Democrat from Windsor Heights, said Reynolds is governing to raise her national profile, not to do what’s best for Iowans.

“Part of my problem with this tax bill is the fact that it was rushed through the process specifically so she could talk about the tax bill tonight. That’s now how we make policy,” Konfrst said. “We make policy through deliberation, through negotiation and through honest debate.”

The leading Democratic candidate for governor said Reynolds should be paying attention to challenges the state is facing, like a lack of child care, affordable housing and a workforce shortage.

“Our current governor is focused on a national, political agenda that we all know by now does no good for Iowa and does no good for the rest of this country,” DeJear said during a news conference today.

(This post was updated at 3:30 p.m. with additional information.)