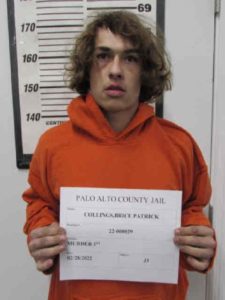 A second man has been arrested and charged with the murder of a Washington, Iowa man who was killed nearly two years ago in northwest Iowa.

R.J. Bontrager’s body was found in Virgin Lake, which is near Ruthven, in July of 2020. An autopsy determined the 27-year-old been beaten to death.

Thirty-one-year-old Allan Michael Schwidder, formerly of Emmetsburg, is serving a 50 year sentence for Bontrager’s death after pleading guilty to second degree murder a year ago. In court documents, Schwidder said he and Bontrager had been fishing and got into a fight.

Last night, 22-year-old Brice Patrick Colling of Emmetsburg was arrested and is being charged with first degree murder in Bontrager’s death.