You are here: Home / Business / Sioux City metro ranks #1 in US for economic development 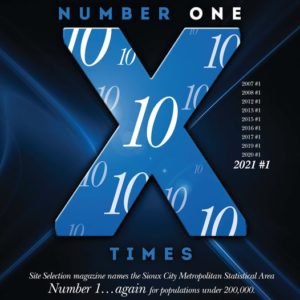 The Sioux City metro area ranks as the nation’s top spot for economic development for populations under 200-thousand, according to Site Selection magazine’s annual rankings.

Chris McGowan, of the Siouxland Chamber of Commerce, says it’s the third straight year and the tenth time overall Siouxland has ranked first in the nation since 2007.

“This is a manifestation of the commitment that business has to the tri-state region of Iowa, Nebraska and South Dakota,” McGowan says. “Clearly, these results speak to local companies who have options to go anywhere in the country but they make the determination to grow right here in Siouxland.”

McGowan says Siouxland hopes to keep that streak going in 2022.

Multiple companies have recently pledged to spend tens of millions of dollars on opening new facilities or expanding existing ones, bringing hundreds of jobs. McGowan says, “If we can maintain the momentum that we’ve had in the past, it’s certainly possible that we could repeat.”

“I’ve had the pleasure of coming here, it must be half a dozen times by now,” Bruns says. “It’s just an amazingly consistent track record of facility investment by your employers.”

The announcement followed an event on the riverfront in South Sioux City which was keynoted by Nebraska Governor Pete Ricketts.