You are here: Home / Fires/Accidents/Disasters / Couple talks about surviving deadly tornado near Winterset 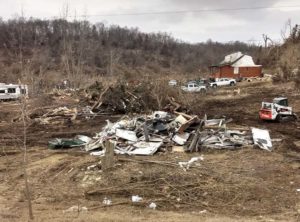 Debris piled up after the Saturday tornado south of Winterset. (RI photo)

Volunteers with equipment and chain saws were helping clean up Sunday at the home of Teresa Houg off Highway 169. She said her husband was going out to pull the car in the garage when the tornado hit Saturday evening.

“And as he opened the door, I could see it, I could hear it over the hill,” She says. Houg said she saw dark angry-looking clouds and it all happened very quickly. “Started hearing the crashing and booming and the wind – and then it was over,” Houg says. 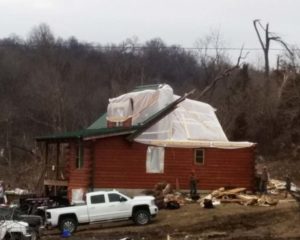 Part of the roof was blown off the home of Teresa and Don Houg. (Ri photo)

Her husband Don said he was trying to get the car out of the hail when he heard the tornado.

“A train was coming down the road, it sounded like a train just coming. As soon as I got in the house, and around the corner, we had big tall pine trees in our yard and I just watch them take off. And then the door came in,” Houg said. They lost seven outbuildings and the upper portion of their log home blew off.

Don Houg said it was much worse for their neighbors across the road. “As soon as I got my bearings and looked outside and everything was gone, I knew they were in trouble, and I ran, and Judy was crying, and she was by her husband,” Houg said. Their neighbor — 67-year-old Rodney Clark — was one of the people who died.

Houg said a large pile of rubble in front of his home is all that is left of the Clark’s house. There are bits of pink insulation hanging from the branches of the trees left standing around their home.

The Houg’s were overwhelmed by the people who turned out to clear trees and debris from around their home. “We’ve got a lot of friends and family, and people we don’t even know out here helping,” Teresa Houg said. 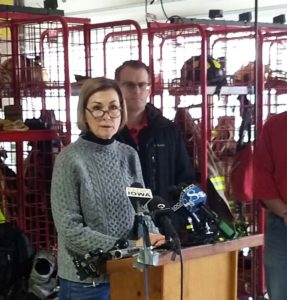 Governor Kim Reynolds toured the area and also commented on the people who showed up to help. “Two-hundred to 300 Iowans. Not only from Madison County and Winterset — but from communities and towns all across the state — that were on the ground the minute it was light and they could start helping,” the governor said. “It’s just unbelievable. I tried to walk through and thank them and over and over the response was “we’re Iowans and that’s what we do’.”

Madison County Emergency Management Coordinator, Diogenes Ayala had more details on the storm. “The National Weather Service determined that the tornado that tore through our community was estimated to be an EF-3. With wind speeds between 136 miles and 155 miles per hour. There were approximately 52 damaged or destroyed homes in the path of the tornado that spanned over 13-point-seven miles,” according to Ayala.

The governor issued a disaster proclamation for Madison County. The Iowa Department of Natural Resources confirms one person died in the storm Saturday at Red Haw State Park in Chariton. The park had extensive damage and will be closed until further notice.