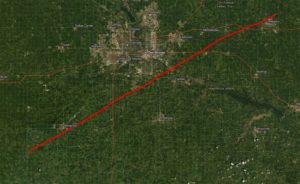 The National Weather Service has upgraded the rating of the tornado which left six dead in Madison County Saturday.

The tornado was upgraded from an EF3 to an EF4, the second-highest on the rating scale.

The weather service says the tornado developed just north of Macksburg in Madison County and moved southeast of Winterset into through Warren, Polk, and ended in Jasper County near Newton.

Governor Kim Reynolds issued a disaster proclamation Monday for nine more counties hit by Saturday’s severe weather. The governor’s proclamation allows state resources to be utilized to respond to and recover from the effects of this severe weather in Adair, Benton, Decatur, Jasper, Lucas, Polk, Tama, Warren, and Wayne counties.

Reynolds had already issued a disaster proclamation for Madison County — where six people died in the tornado.