You are here: Home / Crime / Courts / Senator Grassley has concerns on timeline for Supreme Court nomination 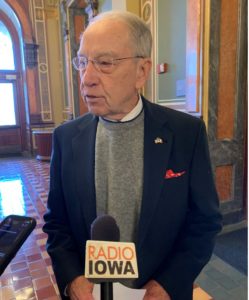 Grassley, the ranking Republican on the Senate Judiciary Committee, says Democrats want to start Jackson’s hearings on March 21st. “That probably would allow them to get done by Easter,” Grassley says. “It wouldn’t have to be done by Easter because the ninth seat on the court that she will fill won’t be vacant until the first of July, around that period of time, so there’s no hurry from the standpoint of the court only having eight members.”

Comparisons are being made to how swiftly Republicans confirmed now-Justice Amy Coney Barrett in 2020, but Grassley says it’s not apples-to-apples. “Barrett didn’t have any federal government relationship whatsoever when she was picked to be on the Supreme Court,” Grassley says, “whereas there’s just 500 cases by Judge Jackson at the district court level, only two at the D.C. circuit court level.”

Grassley says senators are going through all of those cases but also need time to review Jackson’s years of service on the sentencing commission. Jackson and Grassley met one-on-one earlier this month, shortly after President Biden announced she was his choice to replace Justice Stephen Breyer, who’s stepping down at the end of June.

Certainly, he says, all 11 Republicans on the Judiciary Committee will want to meet with Jackson, but Grassley says there are 39 other GOP senators who deserve an opportunity to question her before they cast a vote. Grassley makes the following prediction about the confirmation process for the potential first black woman on the nation’s high court.

“It’s going to be fair and thorough, both the vetting as well as the questions before the committee,” Grassley says, “and Republicans are not going to get down in the gutter like the Democrats did with Kavanaugh.” Grassley is referring to now-Justice Brett Kavanaugh, who was nominated for the Supreme Court by President Trump in 2018. Shortly after being nominated, Kavanaugh was accused of sexually assaulting a woman in the 1980s when they were in high school, and two other women accused him of sexual misconduct, all allegations he denied. After fiery hearings, Kavanaugh was confirmed by the Senate on a 50-48 vote.