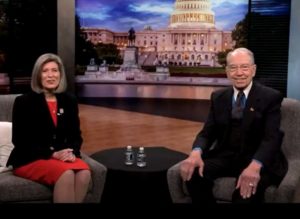 “Energy security is national security,” Ernst says. “Banning Russian oil was long overdue but it’s unacceptable that this administration remains beholden to the radical, deranged climate agenda of the far left and still refuses to support America’s homegrown energy, like Iowa biofuel.” Ernst, a Republican, says the Homefront Energy Independence Act has bipartisan support and would put the ban on Russian oil into law while combining several other efforts from previous bills.

Ernst says, “It would make E-15 available year-round, establish an E-15 and biodiesel tax credit, direct EPA to finalize their E-15 labeling rule, and provide for biofuel infrastructure and compatibility with retailers.” Ernst says gasoline prices are at record high levels, topping four dollars a gallon in many states, and she says the solution is simple: backing biofuels.

“Iowa’s clean, American-made renewable fuels are ready and available to meet our nation’s needs right away,” Ernst says. “In fact, the current excess ethanol capacity domestically is nearly the same as the amount of Russian gas the U.S. had been importing, roughly 83-million barrels versus 87-million barrels.”

Senator Chuck Grassley quotes AAA in saying gasoline prices nationally are averaging $4.17 a gallon, surpassing all-time records set in July of 2008. Grassley, a Republican, disagrees with the administration “begging OPEC to send us more oil” while releasing billions of gallons from the strategic petroleum reserve.

“While the price of oil continues to go up, President Biden is off talking about electric vehicles,” Grassley says, “which require, can you imagine, rare earth minerals that come from where? Russia and China.”

Grassley says domestic biofuels provide the quick and easy answer the country needs by immediately slashing prices at the pump. “It’s a clean energy solution that can immediately lower gas prices and bolsters American energy independence,” Grassley says, “and will result in a cleaner environment than importing dirty oil from Venezuela.”

AAA Iowa shows gasoline prices are averaging $3.89 a gallon statewide, which is still shy of the Iowa record average of $4.02 set in July of 2008. In the past week, gas prices in Iowa have risen 46-cents a gallon on average, and they’ve risen 60-cents in the past month. A year ago, gas was averaging $2.76 in Iowa, a $1.13 below the current price.