You are here: Home / News / Reynolds reviews recent record as she kicks off reelection bid 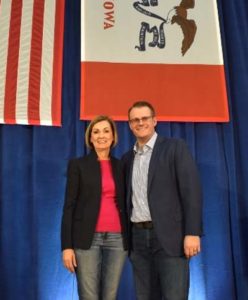 After raising nearly$4 million last year and delivering the GOP response to President Biden’s State of the Union speech last week, Kim Reynolds has formally kicked off her bid for another term as Iowa’s governor.

“I want to use the next four years to show how much further we can go when we trust Iowans,” Reynolds said.

Reynolds addressed a crowd of supporters on the Iowa State Fairgrounds. “I am so excited to finally announce tonight my candidacy for governor of the great state of Iowa,” Reynolds said near the end of her remarks.

Rather than outline proposals for the future, Reynolds reviewed her recent record, including last week’s tax bill and last year’s ban on mask mandates in schools.

“We got our kids back in the classroom and, again, we did it before anyone else. Unlike Democrats, we didn’t wait for bad poll numbers to finally discover science,” Reynolds said, to laughter and applause, as she contrasted her approach to the pandemic to the approaches of “blue state governors” and President Biden.

Her supporters cheered loudly for another action, the law Reynolds approved a week ago that bans trans athletes from participating in girls’ and women’s sports in Iowa’s schools, colleges and universities.

Reynolds became the chief executive of state government in mid-2017 when Terry Branstad resigned as governor to become ambassador to China. Reynolds was elected to a full, four-year term in 2018. During her 2022 campaign kick-off, Reynolds criticized Democrats in general and President Biden in particular, and suggested Democrats were misjudging the problems Americans face. “The threats facing this nation aren’t from Canadian truckers, Joe Rogan’s podcast or parents who care about their child’s education,” Reynolds said, to loud cheers.

Reynolds offered this assessment of the 2022 campaign: “It is not about liberal versus conservative. It is not about Republican versus Democrat. It is about who is going to fight to keep Iowa and America free.”

Reynolds concluded the event by saying Republicans have a good chance to “make this the best November” ever for the GOP. A Des Moines Register Iowa Poll released this weekend found Democratic gubernatorial candidate Deidre DeJear trailing Reynolds by eight points. DeJear, a Des Moines businesswoman who has never held public office, said the poll is confirmation Iowans are willing to give her a shot.

“I knew that we were capable, but the question was whether or not we were willing and whether we could see deep down within if we had more gas in the tank,” DeJear said during a virtual news conference earlier today, “and I’m seeing in that poll that we’ve got it.”

DeJear reported raising nearly $280,000, but having just $8500 in her campaign account at the end of 2021. She told reporters her recent fundraising is on an “upward trajectory.”

“Fundraising bumps, I mean, we are seeing them and again it’s encouraging,” DeJear said. “We’re able to build this campaign in such a way that it’s being tooled for the General Election.”

DeJear is the only Democrat actively campaigning for governor.