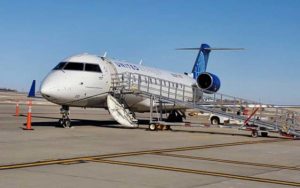 Regional air carrier SkyWest Airlines has announced they are planning to pull their commercial service out of three Iowa airports.

SkyWest has provided the U.S. Department of Transportation with a 90-day notice of intent to discontinue service to 29 communities served by the Essential Air Service program, including the airports in Mason City, Fort Dodge, and Sioux City.

SkyWest in their notice cites the ongoing pilot staffing shortages as the reason for ending service. SkyWest last month announced they planned to reduce the number of weekly flights from Mason City to Chicago and from Fort Dodge to Chicago from 12 to 10 because of staffing issues.

SkyWest had recently suspended one of its three daily flights from Sioux Gateway Airport to Denver, and Sioux City officials last month announced they were extending their service agreement with the air carrier.