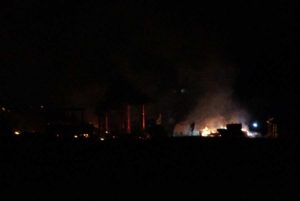 Fire broke out last night in a large structure at the Lost Island Theme Park, a new amusement venue under construction in Waterloo.

The $100 million entertainment attraction that’s scheduled to open in late May on the south side of the city. When fire crews arrived, they found a nearly 1,500 square-foot building completely engulfed in flames. The fire, which could be seen for several miles, raged for more than 90 minutes before being brought under control.

Waterloo Fire Rescue officials say the structure was destroyed and no injuries were reported. Investigators are working to determine the cause. The theme park’s owner, Eric Bertch, told a local television station that the fire won’t delay the theme park’s scheduled, which is now about two months away.