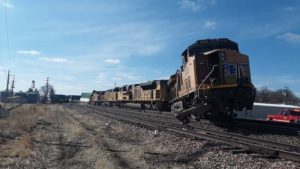 This train derailed in Denison after hitting a stalled semi. (KDSN photo)

Officials say three people are injured after a train hit a semi and derailed in Denison.

Tim Zenk, the assistant fire chief for the Denison Fire Department, said the truck carrying weights for a crane reportedly got hung up on a railroad crossing on Thursday afternoon.

“An eastbound locomotive and train traveling around 65 miles an hour separated the trailer in half,” Zenk said. “We had to get Public Works involved to get some streets shut off and get the traffic out of the area.”

Union Pacific confirmed in a written statement that two members of the train crew and the truck driver were all taken to the hospital in Denison after the collision. Crews arrived late Thursday to begin clearing and repairing the tracks. Zenk said up to 1000 feet of railroad tracks may have to be replaced.

“They’ll clear all the wrecked material and locomotives, rebuild the lines, and get this thing flowing again,” Zenk said. “The railroad won’t mess around and I would recommend the public try to stay a couple of blocks away from here.”

That area includes a pair of railroad crossings just south of Highway 30 in Denison. A number of rail cars derailed. Union Pacific does not have an estimate on how long repairs are expected to take.