You are here: Home / News / Another push to update Iowa’s 44-year-old ‘Bottle Bill’ 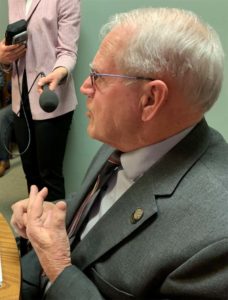 A plan to revamp Iowa’s “Bottle Bill” has cleared its first hurdle in the Iowa Senate and key lawmakers vow this is the year they’ll approve changes in the system for redeeming the nickel deposits on cans and bottles.

Senator Ken Rozenboom, a Republican from Oskaloosa, said there’s “a growing pool” of deposits that are never paid back. “I’ve been here 10 years. The concept has been around for well over 40 years. Every year we have seen proposals, we’ve seen bills to fix the problem,” Rozenboom said. “In my view, those attempts never got to the heart of the problem and this bill is an attempt to do that.”

Rozenboom cites one estimate indicating the wholesale distributors of beer and pop keep as much as $48 million annually from unredeemed deposits. His bill would have that money routed to the state instead and deposited in the Taxpayer Relief Fund.

“Getting rid of the private innovation and expanding government we don’t believe is the solution,” said David Adelman, a lobbyist for the Iowa Wholesale Beer Distributors Association.

Jon Murphy is a lobbyist for the Iowa Beverage Association which represents the distributors of non-alcoholic drinks. The group is instead proposing creation of a non-profit outside of state govenrment that would manage the redemption system — and start charging the nickel deposit on bottles and cans of water, tea and sports drinks.

“It’s important to our industry that we get the plastics back that we use for our bottles,” Murphy said. “…We believe that every bottle out there should come back and become another bottle.”

Rozenboom’s bill would let grocers opt out of accepting empty bottles and cans and paying the deposits. Former Senator Bill Dix is now a lobbyist for Fareway, which has objected to having customers bring dirty empties back inside grocery stores. “We also support the fact that it brings administration of the program into a state agency,” Dix said.

R.G. Schwarm is a lobbyist for Cleaner Iowa, a group that backs the Bottle Bill. The group opposes letting more than two-thousand grocery stores and convenience stores opt out of accepting empty cans and bottles and paying back the deposits..

“There are approximately 60 redemption centers,” Schwarm said. “…We’re going to be removing 90% of the infrastructure and redemption opportunities for consumers.”

Rozenboom’s bill also raises the per container fee redemption centers get from one cent to two cents. Sheri Cunningham owns the redemption center in Pella and she told lawmakers she’s struggling to keep the business open.

“If I close, 21 million containers are going to be out there and somebody else is going to have to find a way to redeem them,” she said.

Senator Joe Bolkcom, a Democrat from Iowa City, said tens of millions of dollars in deposit money isn’t being redeemed and it needs to be accounted for and perhaps used to open more redemption centers.

“Iowans love the Bottle Bill,” Bolkcom said. “If we don’t get something done, it is going to fall apart. It is on life support here.”

Republican Senator Jason Schultz of Schleswig said negotiations among the grocers, retailers and wholesalers have failed to produce an agreement and it’s time for legislators to force the issue. “This is the best game in town we have right now,” Schultz said.

Schultz helped guide the bill out of a subcommittee and all but guaranteed the bill would clear the full Senate Ways and Means Committee soon.