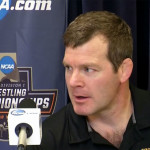 Iowa wrestling coach Tom Brands has signed a contract extension through the 2029 season.

Brands is in his 16th season as Iowa’s head wrestling coach. His teams have won four NCAA and six Big Ten titles, and enter this week’s NCAA tournament as defending national champions.

“There is no better person to lead the Iowa Wrestling program than Tom Brands. His sustained success at the University of Iowa is unmatched,” said Athletic Director Gary Barta. “Tom epitomizes the Win. Graduate. Do it Right. philosophy. I could not be happier for Tom, his staff, student-athletes, and our fans.”

Brands became the eighth head coach in program history in 2006. He is a five-time Big Ten Coach of the Year and three-time National Coach of the Year. He has coached 13 NCAA individual champions, 89 All-Americans, 24 Big Ten champions and 142 academic All-Big Ten honorees.

Iowa has led the nation in attendance every year since Brands’ first season in 2006-07. The Hawkeyes set a national dual average attendance record in 2021-22, averaging 14,905 fans at each of their six home dates and selling out season tickets for the first time in program history.