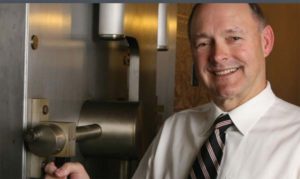 State Treasurer Mike Fitzgerald says he supports withdrawing any state investments in Russian companies, but it’s difficult to do today given the status of Russia’s economy.

“The ruble has crashed and the stock market in Russia is closed,” Fitzgerald said, “…so if you wanted to sell out you can’t and if you sold out, you get pennies on the dollar.”

Roby Smith is the Republican who’s running against Fitzgerald, a Democrat, in this fall’s election. Smith recently released a statement saying the State of Iowa needs to strategically divest of any Russian securities it may hold and prevent any future investment in Russia with Iowa’s public funds.

Fitzgerald has signed onto a statement with 38 other state treasurers calling for public pension funds and other state and local governments to divest from Russia. “We’ll be pushing for more measures,” Fitzgerald said this weekend on “Iowa Press” on Iowa PBS. “If a pension fund like IPERS has been hurt, well maybe we can sue and get Russian assets like all of those yachts you see floating around that are worth hundreds of millions of dollars because we’ve been damaged by Putin and there’s a good legal argument to be made.”

The state treasurer said IPERS, the Iowa Public Employees Retirement System, has mutual funds that have investments in Russian entities. And Russian-linked investments account for about one-half of 1% of the portfolio for the state-run College Savings Iowa plan.