You are here: Home / News / Unemployment rate drops in January 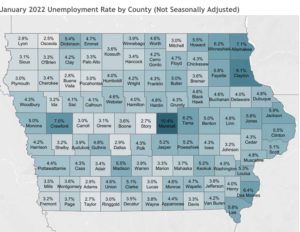 Iowa’s unemployment rate dropped to 3.7% in January, which was down from the revised December rate of 3.9%.

Iowa Workforce Development says the leisure and hospitality industries added the most jobs in January — up 2,500. IWD says the industry saw a loss of 800 jobs in December — but has generally trended up steadily since COVID quarantines ended. Most gains were within accommodations and food services, which are up 6,500 jobs since August.