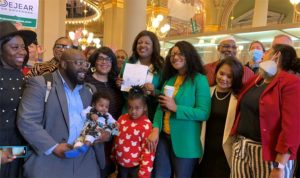 After announcing she was running for governor seven months ago, Democrat Deidre DeJear has now submitted 6600 signatures on nominating petitions, to place her name on Iowa’s June Primary ballot.

“We just made history,” DeJear said, to cheers from a crowd of supporters gathered in the Capitol rotunda.

If elected, DeJear would be the first black Iowan to serve as governor.

“It’s the type of history that outlines possibilities for not only our young people, but each and every one of you all,” DeJear said. “We’re seeking to run for this office because we want to see change happen in this state, the type of change that impacts y’all’s pocketbooks, your communities, your counties and the better life that we can all have in this state.”

DeJear is a native of Mississippi who graduated from Drake University and then settled in Des Moines, where she runs a small business. DeJear grew emotional as she and her supporters waited for staff in the Secretary of State’s office to review her nominating petitions. DeJear told reporters it’s because she was surrounded by mentors.

“Some really strong women who have helped me chart this path and reminded me of what I was capable of,” DeJear said. “And I just hope I’m emotional because I hope to do that for other young women and young boys, to help them understand whatever they dream is possible.”

DeJear’s name has been on Iowa’s statewide ballot before, as the Democratic Party’s 2018 nominee for Secretary of State. DeJear lost that race by eight points. A recent Des Moines Register Iowa Poll found DeJear trailing Republican Governor Kim Reynolds by 8%.

Last week, Kim Reynolds formally kicked off her campaign for a second full term as governor with a rally on the state fairgrounds. Reynolds and her husband delivered nominating petitions with 16,000 signatures to the Secretary of State’s office last Thursday. Reynolds has not commented on DeJear’s candidacy, but a spokesman for the Iowa GOP issued a written statement.

“Freedom is on the ballot in November and there is only one candidate in this race who will defend it – that is Kim Reynolds,” Republican Party of Iowa communications director Kollin Compton said.