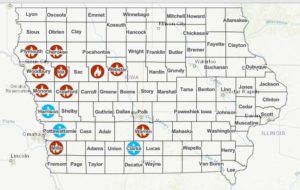 Rural fire departments have been kept busy responding to field fires the past couple of days — especially in northwest Iowa where six of the ten active burn bans are in place.

That includes Woodbury County where a burn ban was enacted on February 20th. County emergency services director, Andrew Donawa, says some people have apparently forgotten about it. He says they’ve had a little snow and rain and people must think they are okay to burn brush. “That’s not the case, we’re still fighting this drought from all this dry weather.”

Donawa says they’ve had more than one dozen fire calls in Woodbury County alone the past two days. Other northwest Iowa counties with burn bans are Plymouth, Cherokee, Ida, Monona, and Crawford counties. Donawa says farmers need to be patient before burning away brush piles

“Just wait, we’ll let you know when the ban is lifted. And if you feel like you need to burn, you should probably call your local fire chief and double-check that the ban has been life. And if it is not lifted — make sure you’re not burning,” Donawa says.

He says if you ignore the ban, you are putting your property and nearby property at risk as well as violating the law. “The sheriff’s office will come out and most likely talk with you and they could possibly give you a ticket for burning under the burn ban,” Donawa says. “The burn bans come from the Fire Marshal’s office at the state and then the sheriff has the authority to enforce that as a ticket or a citation or a fine.”

Any violation of the burn ban declared by the state fire marshal is a simple misdemeanor with the violator subject to a fine and court costs. The State Fire Marshal’s website lists other burn bans in Mills, Webster, Warren, and Calhoun County.