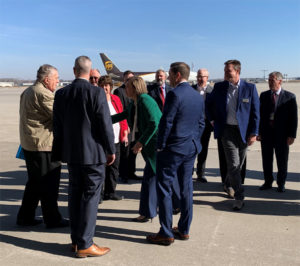 “While COVID was a massive disruption for air travel, traffic is projected to grow significantly moving forward,” Reynolds said this morning. “…Now is the time to maintain this momentum and ensure ongoing growth.”

Ten million dollars will be split equally among airports in Des Moines, Cedar Rapids, Dubuque, Sioux City, Waterloo, Mason city, Fort Dodge, Burlington. The other $90 million will be distributed based on passenger traffic in 2019.

“This announcement is about more than just our airports. It’s about all the incredible things airports make possible for our state: tourism, business growth, economic prosperity and so much more,” Reynolds said. “…Our investment in Iowa’s airport transportation system will support our long term growth and help us realize our potential.” 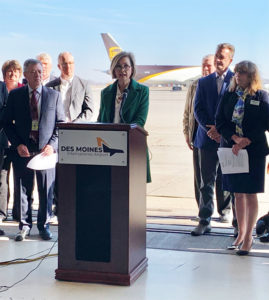 Reynolds made the announcement at the Des Moines Airport, with a UPS cargo plane parked on the tarmac behind her. Kevin Foley, executive director of the Des Moines International Airport, said this funding will go toward building a new passenger terminal.

“The Des Moines terminal will create opportunities to grow air service, potentially bring new airlines into the state, enhance operational efficiencies and safety,” he said, “and offer modern facilities that appropriately represent the state of Iowa to the traveling public.”

Pam Hinman, director of marketing at the Eastern Iowa Airport in Cedar Rapids, said the funding will be used for the fourth and final phase of passenger terminal facilities that began in 2014.

“This is a historic investment in the state’s commercial service airports,” she said.

All the projects being financed with this money are to be completed by 2026.