You are here: Home / News / An 11-pound mammoth tooth found in Sheldon 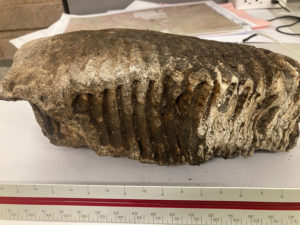 A mammoth tooth has been found in northwest Iowa.

An engineering contractor working on a lift station project for the city of Sheldon spotted the woolly mammoth tooth on the ground after a recent excavation.

The tooth was on property owned by Northwest Iowa Community College near the Sheldon Rec Trail, about 800 feet west of the Floyd River.

Experts say the tooth, which weighs over eleven pounds was likely in the ground since the last glacial maximum which is suspected to have been over 20,000 years ago.

Northwest Iowa Community College officials say they will retain ownership of the tooth, but will display it at the Sheldon Prairie Museum in Sheldon.