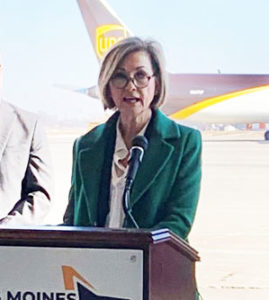 Proposals Governor Kim Reynolds unveiled earlier this year have stalled in the legislature, including her call to reduce the number of weeks Iowans may receive unemployment benefits.

Reynolds told reporters she’s working with lawmakers to come up with a compromise to get that “across the finish line.” “Right now, people that qualify for unemployment benefits, they qualify for those for over six months and that is just too long,” Reynolds said during a news conference Wednesday. “And so the bill that we’ve proposed, it moves that down to four months which is still responsible, reasonable.”

A controversial part of her plan delayed payment of the first week of jobless benefits, but Reynolds said she’s willing to make accommodations for seasonal workers, especially in construction, who rely on unemployment benefits when the Iowa weather makes it impossible to work.

Her original workforce bill also included new liability protections for the trucking industry. The bill that dramatically stalled in the House Wednesday night when Republicans couldn’t muster 51 votes to start debate included those provisions. While Republican House Speaker Pat Grassley said he was surprised by some of that opposition, there’s still time to come up with a compromise.

“We want to continue to try and make progress and so I don’t think you’re going to see it all of a sudden just disappear from the conversation,” Grassley said, “whether it’s the rest of this session or moving forward into next.”

Democratic leaders say the proposed cut in unemployment benefits for laid off workers has stalled because a recent Des Moines Register Iowa Poll found 53% of likely voters oppose the idea.