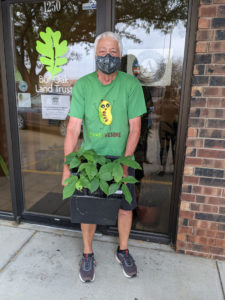 A project by the Bur Oak Land Trust to bring Pawpaws back in Iowa is entering its second year.

Executive Director Jason Taylor says they planted seedlings in the first year and had people foster them.
“They took care of them generally between April and October — then they would return them to us. So we were able to receive about 800 saplings that were grown over the summer,” Taylor says.

Pawpaw trees were once common in Iowa as bison and giant sloths that would eat the fruit and disperse the seeds. Taylor says the Iowa City-based organization is hoping to expand on the number of trees they grow.

“This year we were actually able to get about 4,000 seeds…but we really just don’t have the capability to pot four-thousand seeds, it’s too big,” according to Taylor. “And so we are actually starting to sell seeds to the community for those who are interested in putting them in their own yards. And then we also are potting around 600 this year so we will have another group of fosters working with us to grow them over the summer.”

He says the Pawpaw trees like shady areas with wet soil. “And so they are often found naturally growing near streams. But they definitely do work well in an urban environment. There are a number of locations in Iowa City where people have planted them in their yards. And sometimes when they are getting started you need to give them a little more water than you normally would,” Taylor says.

Taylor says you need to have a least two trees to pollinate and create the fruit. “It’s a very interesting fruit. Most people do like it. It’s about the size of a rusette potatoe — they can be fairly large. It’s the largest native fruit to North America — so it’s a little bit unique there. It’s kind of a yellowish-green color, and then when it’s ripe, they will fall off the tree.”

He says the Pawpaw tastes like a custard that is a mango-banana mix. Taylor says the Pawpaws can be planted in a patch. “They like to grow close together, and so you can actually grow a little colony of these if you have a ten-foot patch of land in your yard. You can grow five or six of these trees together and that allows the beetles that pollinate them a better chance of finding another tree,” Taylor says.

Taylor says you can go to their website at buroaklandtrust.org and buy Pawpaw seeds, or you can volunteer to help foster the seeds into saplings. He says the Pawpaw will grow well in all but the northern counties of Iowa where it would be too cold for them to properly grow.